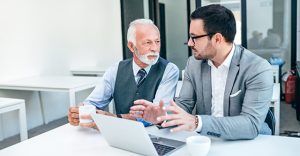 In a reverse mentoring program, a younger and usually less experienced employee mentors an older one, who’s typically in management or even an executive or business owner. The general idea is for the older employee to “get hip” to the latest technology or a new trend while the younger one gains experience and becomes better acquainted with the higher-level staff member. As with any ambitious undertaking, setting up a reverse mentoring program takes time and effort on everyone’s part — particularly those at the top who presumably have plenty on their plates already. If your organization decides to commit itself to such a program, be prepared to keep the faith that the practical benefits will eventually justify the effort.

First and foremost, lay out a clear set of objectives by which to measure progress. For example, you might establish that, within three months, you’ll have developed three to five mentoring relationships. Another objective should be a minimum number of meetings (or total hours of interaction) between participants over a specified period. Bear in mind that, if you set too rigid a schedule, the routine could become more important than the substance of what’s accomplished. Successful relationships between younger mentors and older workers will evolve naturally so long as both parties are committed to the process. Each of the participant pairs should also set their own goals with appropriate time frames for either accomplishing objectives or completing tasks toward them. It’s a good idea to set an end date for the relationship so participants don’t feel overwhelmed by the commitment. Of course, a flourishing mentorship can always be extended.

Generally, reverse mentoring programs work best when they’re voluntary. Invite employees to volunteer as either a mentor or the person being mentored. Don’t expect to be swamped; it’ll probably take a few “early adopters” to get the ball rolling before others decide to jump in. (Note: Before launching a program, survey executives and employees to determine whether an adequate amount of interest exists to justify giving it a try in the first place.) Ideally, the number of older employees willing to meet with a reverse mentor will approximate the number of younger ones interested in being one. How you handle the matchmaking process will depend on the size of your organization, its culture, and the alignment of interests and expertise of both parties.

Reverse mentoring programs don’t always work out. But sometimes they get off to a slow start and eventually create a positive experience for participants and fruitful results for the organization. You’ll stand a better chance of keeping the faith in yours if it’s carefully designed and implemented. For further information and help setting metrics, contact us. © 2020