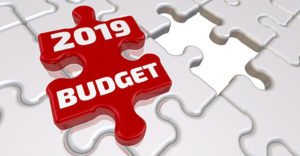 New federal budget figures are in, and the results are mixed. For the first eight months of fiscal year 2019, the U.S. government recorded an estimated budget deficit of $738 billion, according to a Congressional Budget Office (CBO) report. Compared to the same period in FY 2018, revenues rose by $49 billion (2%) while outlays were up $255 billion (9%). Individual income and payroll taxes combined were up $51 billion (3%) and withholding grew by $30 billion (2%). “That change largely reflects increases in wages and salaries that were partly offset by a decline in the share of income withheld for taxes,” the CBO said. Here are the details. © 2019