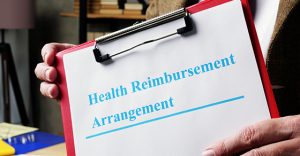 Many employers have established Health Reimbursement Arrangements (HRAs) as a tax-advantaged way to allow employees to receive reimbursements for out-of-pocket medical expenses. What’s often overlooked is that, under certain circumstances, HRAs can function as an investment and savings vehicle.

Let’s say an employer establishes an HRA for employees who elect the high-deductible health coverage option under its medical plan. The HRA is considered unfunded, and each participant receives a credit of $1,000 per year — with unrestricted carryovers.

Over time, some employees amass sizable HRA account balances and pose a simple question to the employer: Can we earn interest on these balances?

The short answer is yes, but not by making actual investments — unless a trust is established to fund the HRA. (We’ll address this further below.) When an HRA is maintained on an unfunded basis, credits under the HRA represent bookkeeping entries rather than actual, separate assets. Reimbursements are paid out of the employer’s general assets.

Because no separate assets are involved, HRA balances under an unfunded plan won’t earn interest in the way that, for example, a savings account earns interest. If the employer wishes, however, it can periodically credit additional amounts to participants’ bookkeeping accounts in an amount equivalent to the interest that they’d have earned if their HRA balances had been held in an interest-bearing investment.

Like other amounts credited under an HRA, these “notional” credits would be nontaxable. They could be used only to reimburse qualifying medical expenses, and they’d be subject to the Internal Revenue Code’s rules prohibiting discrimination in favor of highly compensated individuals.

As HRAs mature, long-term participants may accumulate substantial HRA balances if there’s a carryover feature. This can lead some employers to decide to fund their HRAs through a trust — for example, by using a Voluntary Employees’ Beneficiary Association plan. Such funding might be particularly attractive if the HRA carryovers represent a substantial liability on the employer’s balance sheet.

If an HRA were funded, the employer could deposit funds equal to the HRA credits into the trust to be held in an interest-bearing account, with interest allocated to participants’ HRA accounts based on their HRA balances. Note that funded HRAs are subject to additional requirements, including:

Employers should carefully consider the right strategy for communicating this benefit to participants — including the ability to amend or discontinue interest-crediting in the future.

First and foremost, HRAs can serve as a valued health care benefit for employees. However, as an intriguing “secondary benefit,” the investment and savings component may pique the interest of many participants. Cg can provide further information on the concept. © 2021