The SECURE Act 2.0 bill has take 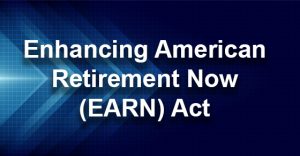 n another step closer to becoming law. On June 22, the Senate Finance Committee unanimously approved its version of the bill, now dubbed the Enhancing American Retirement Now (EARN) Act. That bill must be merged with another Senate bill, the Rise and Shine Act. Once that’s been completed, the two bills will be reconciled with a retirement bill already passed by the House of Representatives (the SECURE Act 2.0). Among other things, the EARN Act would increase the starting age for required mandatory distributions from IRAs to 75. Although the SECURE Act 2.0 bill has bipartisan support, the timing of its final passage in Congress is unclear. Contact us at cgteam.com with any questions. © 2022